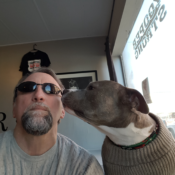 High school dropout and runaway at 14 years old.  After 20 years working in the building trades, I obtained a bachelor’s degree in Geology, then spent 18 years at sea, working as a marine seismic geophysicist, 5 years as a geophysical consultant managing seismic surveys around the globe for the petroleum industry and 3 years conducting monitoring and Clean Water Act enforcement of multiple public water supplies, as well as surface and ground water sources, for a Native American Indian tribe.

Vape shop owner of a single store in a rather small and remote, rural community in the Midwestern state of Michigan for the last 6 ½ years, purchased after quitting a 41-year smoking habit there 8 years ago.

One of the founding members of Michigan Vape Shop Owners (MVSO), lobbying for common-sense vaping regulation and legislation at the state level and also had the dubious honor of suing my Governor, state and state health department on behalf of Michigan vapor businesses, successfully stopping an industry-killing flavor ban in 2019 and 2020.

For the last 1 ½ years, I’ve employed a 5 yr old, female pit bull terrier named Bernie at my shop, both enhancing and encouraging successful smoking cessation. She’s well-known in both the vaping community and industry and is featured in an online smoking cessation program developed by Dr. Marewa Glover, director of the independent Centre of Research Excellence: Indigenous Sovereignty & Smoking based in Auckland, New Zealand.