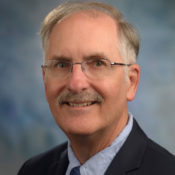 David Ashley is currently a Research Professor in the School of Public Health at Georgia State University. He received his PhD in Physical Chemistry in 1982 from Emory University. He spent 27 years, from 1983-2010 at the Centers for Disease Control and Prevention, National Center for Environmental Health. During this time, he carried out research on the impact of toxic chemicals in the environment on health, developed methods and systems to respond to chemical and biological terrorism, and built a tobacco product and biomarker laboratory. He has performed extensive research related to the impact of cigarette design and contents on the emissions from tobacco products, how people use tobacco products, and resulting biomarkers of exposure. From 2010 until 2017, he was the inaugural Director of the Office of Science at the Center for Tobacco Products (CTP) of the U.S. Food and Drug Administration. In that role, he was instrumental in carrying out the regulatory authorities of the 2009 law which gave FDA authority to regulate tobacco products. He has published over 180 peer-reviewed articles and book chapters related to biophysics, environmental chemicals, biomarkers of exposure and the constituents of tobacco and tobacco smoke. He retired in May 2016 at the Public Health Service rank of Assistant Surgeon General. He has presented extensively at scientific meetings on the chemistry of tobacco and tobacco smoke and biomarkers of exposure. He serves on the World Health Organization (WHO) Study Group for Tobacco Product Regulation and was the Chair of the WHO Tobacco Laboratory Network from 2006 until 2010.