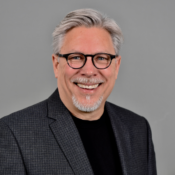 Scott J. Leischow joined Arizona State University in June 2017, and is a Professor and the Director of Clinical and Translational Science. Prior to that, Leischow was at the Mayo Clinic Arizona from 2012-2017, where he led the Research on Health Equity and Community Health (REACH) Program and co-led cancer prevention and control within the Mayo Clinic Cancer Center.  He was formerly an Associate Director at the University of Arizona Cancer Center and also served as Chief of the Tobacco Control Research Branch at the National Cancer Institute within National Institutes of Health and Senior Advisor for Tobacco Policy in the Office of the Secretary of the U.S. Department of Health and Human Services. Dr. Leischow completed his doctorate in Health Education from the University of Maryland, and a postdoctoral fellowship in Behavioral Pharmacology from Johns Hopkins University. Dr. Leischow has also received several awards, including the NIH Directors Award.

Most of the work implemented by Dr. Leischow is translational in nature, and dedicated to moving research into practice and policy.  His research and publications focus on pharmacologic and behavioral treatments for tobacco dependence, tobacco regulatory science, and systems and network approaches to population health. Dr. Leischow developed an early interest in telephone-based counseling as a volunteer and employee at the Racine Underground Safe House (RUSH). After joining the University of Arizona as a faculty member, his interest in providing telecounseling contributed to his decision to create and implement the Arizona Smokers Helpline, the third state quitline in the U.S. While in government, Dr. Leischow also played a leadership role on the development and implementation of the national smoking cessation quitline network, national smoking cessation website (smokefree.gov), national tollfree quitline number (1-800-QUITNOW), and an initiative to prohibit smoking on all Department of Health and Human Services campuses (TobaccFree HHS). Dr. Leischow is past president of the Society for Research on Nicotine and Tobacco (SRNT) and founding Editor-in-Chief of the journal Tobacco Regulatory Science.