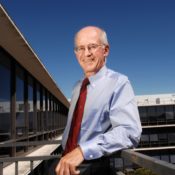 Distinguished Professor of Health and Healthcare

Steven Schroeder, MD, is Distinguished Professor of Health and Healthcare at the University of California San Francisco, where he directs the Smoking Cessation Leadership Center (SCLC). A graduate of Stanford University and Harvard Medical School, he trained in internal medicine at Harvard and in epidemiology at the CDC. He held faculty positions at Harvard and George Washington University. Between 1990 and 2002 he was President of the Robert Wood Johnson Foundation, where he initiated programs in tobacco control that resulted in $500 million in grant expenditures during his tenure. The SCLC, which he founded in 2003, works with professional societies, federal and state organizations, and advocacy groups to both increase the number of smokers who attempt to quit and increase the probability of a successful quit. It has partnered with over 80 organizations, launched the “Ask, Advise, Refer (to a quitline)” alternative for busy clinicians, developed the blue card for 1 – 800-QUIT NOW (over 5 million now in circulation), broadened the range of clinicians involved in smoking cessation, and helped to focus more attention on the lethal combination of smoking and behavioral health conditions. A member of the National Academy of Medicine (formerly IOM), he chaired the American Legacy Foundation Board of Directors (now Truth Initiative), and served on the editorial board of the New England Journal of Medicine for 19 years.