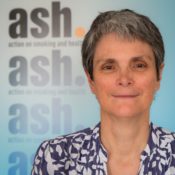 Action on Smoking and Health (UK)

Deborah Arnott is a recognised international expert on tobacco control and the WHO Framework Convention on Tobacco Control, with a particular interest in nicotine regulation and harm reduction. She was a member of the National Institute for Health and Care Excellence committee which developed guidance for England on tobacco harm reduction and of an expert advisory group to the UK’s medicines regulator the MHRA on e-cigarettes.  She also has experience of product regulation under the EU General Product Safety Directive having participated in the development of fire safety requirements for cigarettes.

Deborah has an MBA from Cranfield, is an honorary Associate Professor at the University of Nottingham, and a member of the Royal College of Physicians Tobacco Advisory Group.  She was awarded the Alwyn Smith prize in 2007 by the Faculty of Public Health for her outstanding contribution to public health.